1. What does the above symbol represents?

The output is high when both inputs A and B are high and when neither A nor B is high. 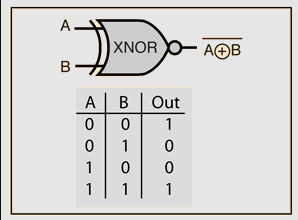 2. The effective resistance of an 2200 V, 50 Hz, 440 KVA single phase alternator is 0.6 ohm. A field-current of 40 A on a short circuit gives a full load current of 200 A. The emf on the open circuit with the same field-current excitation is 800 V. Calculate the synchronous reactance.

3. When a conductor is carrying AC current, the current is not distributed in the conductor uniformly. Rather it has tendency to concentrate near the surface of the conductor. What is this effect known as?

Explanation- Skin effect-The non-uniform distribution of electric current over the surface or skin of the conductor carrying a.c is called the skin effect.

Skin effect is the tendency of an alternating electric current (AC) to become distributed within a conductor such that the current density is largest near the surface of the conductor, and decreases with greater depths in the conductor.

4. Which of the following is the TRUE comparison of Copper and aluminum conductor for high voltage power transmission?

A. Conductivity of copper is less than that of aluminum

B. Tensile strength of aluminum is more than that of copper

D. Specific gravity of copper is more than that of aluminum

Explanation-Copper has much greater radius than aluminium, so the outer electrons are less strongly attracted as compared to aluminium.

Aluminium wires expand in high temperatures and contract in low temperatures when compared to copper, which can withstand thermal changes.

Electrical resistivity of aluminium is higher than copper.

5. Which of the following is NOT true for RAM, used in information technology

B. It is known as Read/write Memory

C. It is not a primary storage device

D. It is also called as volatile memory

Explanation-A primary storage device is a medium that holds memory for short periods of time while a computer is running.

RAM (random access memory) and cache are both examples of a primary storage device.

It is known as Read/write Memory.

It is also called as volatile memory.

6. The angle of deflection of the pointer in a moving iron instrument is

A. Inversely proportional to the square of the current through the coil

B. Proportional to the current through the coil

C. Proportional to the square of the current through the coil

D. Inversely proportional to the current through the coil

From the above torque equation, we observe that the angular deflection of needle of moving iron instruments is square of rms current flowing through the coil.

Advantages of the MI Instruments

7. Which type of wiring Is suitable for places exposed to sun or rain?

In this system of wiring lead covered cables are used on a batten or sometimes without batten, so it is known as Lead sheathed cable wiring. The wire is supported by means of the clips. An earth wire runs along to maintain the earth continuity. The wires can be single or twin core.

The power wiring should be carried out separately from the lighting circuit. In this wiring all the joint boxes and ends of the wires are sealed with compound, so that moisture may not enter in the cable or wires.

It is not a common type of wiring. It is used in the places where dampness, exposing to run and rain etc. are there. It should not be used the places, where in chemical corrosion may occur.

8. Two diametrically opposite holes are drilled in the disc of the single phase induction type energy meter to overcome __ error.

Explanation-Sometimes the disc of the energy meter makes slow but continuous rotation at no load i.e. when the potential coil is excited but with no current flowing in the load; This is called creeping.

This error may be caused due to overcompensation for friction, excessive supply voltage, vibrations, stray magnetic fields, etc.

In order to prevent this creeping on no-load two holes or slots are drilled in the disc on opposite sides of the spindle.

This causes sufficient distortion of the field; The result is that the disc tends to remain stationary when one of the holes comes under one of the shunt magnets.

Explanation-Supervisory control and data acquisition (SCADA) is a system of software and hardware elements that allows industrial organizations to:

A Human Machine Interface, or HMI for short, is a device that allows a human to give directions and receive feedback from the PLC that is controlling the manufacturing process.

Mozilla Firefox or simply Firefox is a free and open-source web browser.

10. Find the true statements for inductive and capacitance reactance.

Explanation-The reactance of an inductor is given by, XL = jωL = 2πfL

Where f is the frequency and L is the inductance.

Where f is the frequency and C is the capacitance.

GIVE US A CALL

SEND US A MESSAGE